Every time we say: “Let there be…” 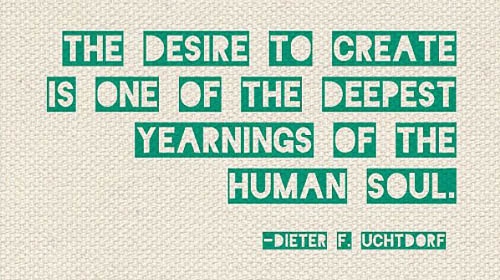 Every day, my boys create. They often emerge from the downstairs laboratory (adults refer to it as a basement) clad in masks and capes, armed with swords and light sabers. More remarkable than the costumes they wear are the sounds they make as they fight imaginary villains and rescue captives. Boys play in surround sound.

“Every time we say, Let there be! in any form, something happens,” writes Stella Terrill Mann. What does it mean to have the power to create something out of nothing?

We generally believe only a select few have this gift, but my boys keep disproving us every day, with every mask and every cardboard box. Elijah wakes up every day needing to create. One day, he couldn’t focus on anything else until he had created a little green monster out of paper, with jagged teeth, and a mouth that opened to talk. Another day, Mary found him in his room, surrounded by dozens sheets of paper, covered with dragons and volcanos and dolphins. When she asked him what he was doing, his response was telling. “Mom,” he said. “I just can’t keep up with all the ideas.”

We pastors talk a lot about being created in the image of God, and yet we rarely talk about bearing the creativity of God, whose first recorded words are “Let there be…” And then God says it six more times, and after seeing what was created, God declares that it is good. How arrogant! How self-promoting! Who makes something and then has the audacity to declare that it is good?

If it is true that we bear the creativity of God, then every human being holds tremendous power. Each of us can utter the words, “Let there be,” and things will actually happen. Yes, words needs to be accompanied with courageous action, but we can, and we must. Yesterday, a new congress was sworn in, and there are those who believe that this will change things. But a new congress will not change things. Courageous people who are willing to see what needs to exist, and who are audacious enough to speak those things into being, will change things.

In the past fifteen months, I have written a manuscript, planted a church, and worked to free 62 teenage girls caught in sex trafficking. It is hard for me to write those three things in succession, because I surely will be seen as a shameless braggart and self-promoter (and maybe I am). But here’s what is also true: many good things have happened in people’s actual lives because those things were brought into existence. Maybe we need a few more people who are willing to own, out loud, that what they created was good. And yes, to God be the glory, because God is the catalyst for all creative things. But God desires creative partners, and when we say yes to God’s creative initiatives, we get to emerge from our own laboratories, clad in beauty and goodness and light.

In it together, friends.